Another Lois Update & Other Stuff 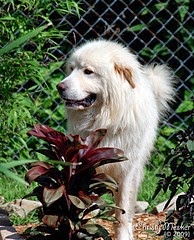 Lois has been home now since Sunday and is doing really good!  Things were difficult at first because she wanted nothing to do with the prescription food the vet wanted her on.  She ate a little bit the first night but turned her nose up at it every offering after that.  Jason had a good idea to ball some up and bake them to make them crunchy.  The first night she loved them and ate a good handful of them. After that, she again wanted nothing to do with them.  Two days went by and she wouldn’t take a single bite.  Anytime we put that food in front of her she would push it with her nose as far away as she could.  It would have been quite humerus if she didn’t need to eat so bad.  Finally the vet allowed us to try a different type of food.  Again she ate a little the first night and then wanted nothing to do with it again.  So we tried one more and third time was a charm!  She apparently loves Nutro Max Weight Control so that will be her food from now on.

On her second day of eating full meals she began to vomit a little again.  We took her in for a blood test to ensure the pancreatitis was not erupting again.  Thankfully, it was not.  The vet believes now that she is eating on her own the feeding tube that is in her throat is agitating her as she eats and causing her to vomit.  So tomorrow morning Lois Lane goes back in to the vet to get the feeding tube removed – yay!  I’ll update more tomorrow when she gets home and we see how she’s doing.  She never reacts well to the anesthetic they use to put her under so I’m sure she’ll be loopy for the first day or two home.  Then hopefully she can get back to her usual, crazy self.

Buddy is doing really good, too!  He hasn’t had an accident in the house for almost a week now and his coat is starting to look almost normal.  I brush him almost every day and every brushing yields a flower pot packed full of white fur.  I bought a Furminator brush for the dogs because I had heard it rocked.  Boy does it ever!  I highly recommend it for anyone that has a dog that sheds – it’s awesome!  They usually sell for around $50 for the large one at pet stores, however you can get them for half-price at our PetResearch store (and it helps to support the site as well).

In other news, Monday morning I head off to San Jose, California for a Search Engine Strategies conference for work.  I’m very disappointed that Jason can’t come with me as planned, though still excited to see the Silicone Valley and very stoked for this conference.  It will not only help me a lot at work but also with my side business.  I’m going with a co-worker that used to live in San Jose, which is cool because he knows all the good places to go.  Due to the time difference we’ll get there fairly early Monday and will have time to drive out to San Francisco and a few other places as well.  I’m taking my Nikon D80 and hope to get lots of cool photos!