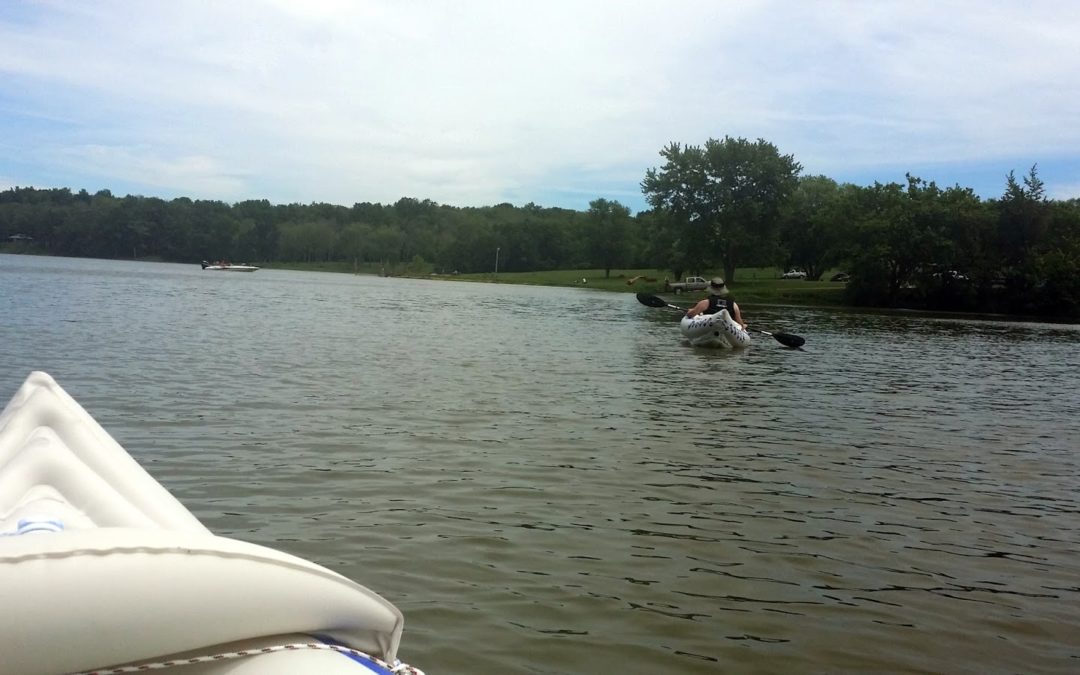 We spent another hour at Lake Jericho with the kayaks on Father’s Day. This was our second trip out and we both did much better than the first time out.  We are quickly adjusting to the Sea Eagle kayaks.  Before I loaded up any gear in mine I took it out and tried to tip it over just to see how much it really took to tip. I can tip it, but I have to try really, really hard to get it to dump me into the water.  Knowing that helped me relax a little more with the wobble since now I know it will only go so far before the pontoons catch the boat from flipping over.  With that being known, I had a much more comfortable paddle this time. Jason also did much better after making some seat adjustments from the last trip out.

We only did an hour again, but it is so fun!  We ended up buying an annual pass for Lake Jericho for $50 (otherwise it costs $6/person each trip).  Since it’s only a couple of miles up the street we figure we’ll go there the most and when we only plan to get an hour or so of paddling in.

On this outing we once again saw many Great Blue Herons. They actually let you get fairly close to them before they fly down the bank to resume fishing.  We saw one spear a fish and eat it about 10 feet away from us. We saw a baby snapping turtle sunning on a log in the water.  We paddled into a shallow cove and saw a huge carp eating algae. He was in such shallow water his back was out of the water.  He was a good foot and a half long and zoomed right past my kayak when I startled him.  We also saw a very large snake.  Jericho is known for having lots of water snakes so we’re always careful to be on the lookout.  I’m not sure what kind of snake it was, likely a water moccasin, but we did’t get close enough to find out. Once I spotted him I went the other way.

I wish I had photos of all of these sightings, but still being a newbie I’m afraid to keep my phone with me in case it gets wet.  But today we have waterproof cases being delivered so I’ll hopefully be able to capture some of these sightings.  Once I get really comfortable I’ll get brave enough to bring my actual camera with the zoom lens that I can keep in the dry bag until I need it.  For now phone photos will have to do!  We’re going back out tonight so hopefully I’ll get to try out the new case and actually be able to snag some pics of all of the wildlife we see on our kayak adventures!

Last night Jason bought us some more accessories for our trips, including a kayak anchor. This will be great for parking in the shade for a rest or for when I want to lounge in the sun or take a dip in the water to cool off.  We also added a mini flashlight, some flat bungee cords, hand sanitizer and a few other miscellaneous items that may come in handy.

The photo below is a partial view of the inside of my kayak.  I actually have a lot more room than this because the dry bags and cooler you see in front of me are usually pushed way up into the front of the boat, but I had just gotten into the bag to get my phone out for a photo.  I also have quite a bit of storage room behind my seat since the seat goes in just past the middle of the boat.  Plenty of room to load up for a day trip!