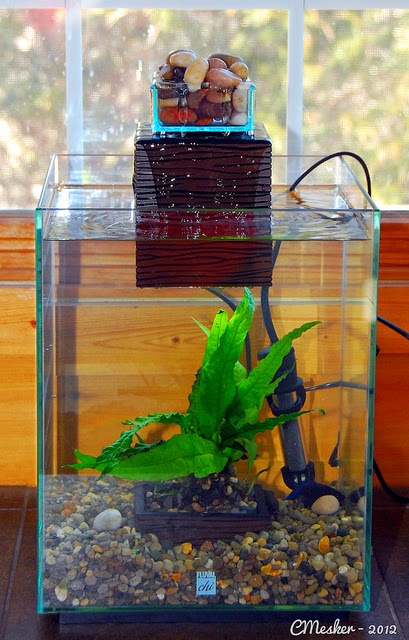 Over the weekend Goldie the Betta fish ( named by my 6 year old niece ) got a house upgrade from a gallon and a half vase to a lighted, Fluval Chi 5 gallon tank. With the extra space I decided to get him some guppie friends.  So far he’s not being aggressive towards them, but he was chasing them around before they got a chance to settle so he’s currently in “time-out” until the guppies get their bearings. I also got a couple of ghost shrimp to see if he will be ok with shrimp – my last betta, Poe, was fine with them, but Jason’s betta, Adolf, hunted them down and killed them.  If he plays nice with them I will get some red fresh-water shrimp.  These guys are just the guinea pigs of the tank ( sorry guys )!

This picture is before the guppies were added, but I’ll post an update of them all once we see if they will swim in harmony.  In the photo, Goldie is the blue blob hanging out in the bottom right corner.