Oh how nice to have a four day weekend the week after being on vacation! And it’s a good thing too, because that one week of being back to work was brutal! Friday after work I came home and got some side work done and attempted to clean up the house, which was still a disaster area from the painting of the bathroom, hallway and foyer (which looks so much better now). Then Saturday we got up and headed to Indy for our annual Labor Day weekend visit with Jami and Larry. We got there and grilled out some yummy burgers and dogs. Later that day we headed to downtown Indianapolis for the Sky Concert and Ribfest that was going on. We took Jason’s F350, which is perfect for tailgating. After walking around for a couple of hours we headed back to the truck to play poker and have a few drinks. At 9:30 a spectacular firework show was a perfect end to the festivities. Pictures can be found here. Once back to the house we watched Superbad…a highly recommended movie for anyone that likes raunchy comedy. It was just as funny the second time as it was the first time, if not more.

Sunday we headed home and pretty much lounged around the rest of the evening, too lazy to do much of anything. Monday morning we got up fairly early and packed up the truck with stuff to take to the campsite. We finally were able to get the camper out to Dog Woods and get it mostly set up! It’s going to be so nice! The last four times we’ve tried to go something has come up, but this weekend we’re finally going to make it! Friday night we’re helping a friend move and Saturday morning/afternoon we have my work employee appreciation deal at the fairgrounds. But right after that we’re heading to Dog Woods for the rest of the weekend…with all three dogs in tow (which should be interesting). We still have a lot of work to do to get the clearing cleaned up. There are some random trees growing where they shouldn’t be and lots of wood to cut up for firewood. The camper still has to be leveled and the bathroom area platform still needs to be built. We’re also replacing weather stripping around all the windows and the inside could use some organizing. Hopefully we’ll get some relaxing in at some point.

Thanks goodness for a two and a half day work week! More photos to come after this weekend.

Oh yeah, this is why you don’t speed during holiday weekends – this was 9 of 15 vehicles we passed that were pulled over during our trip to Indy. 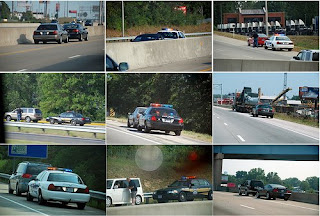