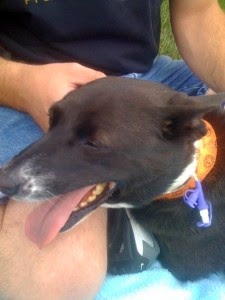 I wanted to get an update out earlier, but things have been a bit hectic with everything going on.  If you read the last Lois Lane post you’ll know she was not doing well as of Wednesday afternoon.  She was whining and shaking and panting again, just like the week before when we had to keep her at the vet on fluids and we knew it wasn’t a good sign.  At this point, she hadn’t kept down anything she had eaten in almost a week. Poor Jason was becoming a wreck being home by himself, deciding what to do for Lois, cleaning up puke all day, not to mention cleaning up pee and poo since Buddy still isn’t 100% house trained.  It was really wearing on him and he sounded miserable.  At that point, we decided it was time for me to head home.  Jason needed help and I needed to see Lois in case she didn’t pull through.

Thursday morning the girls and I took one of the two vehicles we had (thanks Mom & Dad!) and headed home 3 days early.  It was rough driving 12 hours straight by myself with the girls zonked out in the back seat, but it had to be done.  I talked to Jason when I was about halfway home and he said he was taking Lois back to the emergency ER.  She was not holding down solid food and regurgitating too often.  They put her back on fluids until the next day when we were to give them our decision on the next steps.

Dr. Campbell, Lois’ vet, recommended putting Lois on a feeding tube since at this point she had not had any food in 8 days and her body would begin to deteriorate if she didn’t get any calories.  After giving it a lot of thought overnight we decided to give it a try.  Our only options were that or to put her down.  At 4 years old and is such a special dog to us we just couldn’t bear to give up yet.  So now she’ll be on the feeding tube for 5 – 7 days before they re-evaluate her condition.  If by the end of that time she can keep down solid foods and water she can come home.  If not, we have to make the difficult decision to keep trying or to let her go.

We go to visit her every day.  She’s still mad at me for leaving for a week, I think, and won’t have much to do with me.  I’m hoping she gets over that soon.  But she flocks to Jason, so at least she is responding to our visits.  She didn’t look very good yesterday.  Though we believe she was still recovering from the anesthetic from when her feeding tube was inserted.  She never responds well and it takes a couple of days for her to get back to normal.  She was still shaking and panting and the vet said her esophagus is extremely irritated to do all of the vomiting and regurgitating, so she’s also on an acid reflux medication to help allow her throat to heal.

The vet called this morning with an update saying she’s walking around now but still regurgitating.  Though he said with the extent of what she’s been through it’s not abnormal.  And he still thinks we’re on track for the 5 – 7 days at this point.  We’ll visit her again this afternoon and hopefully, she’s looking better than she was yesterday.  I just want her back home safe and healthy!  Thanks to everyone for the thoughts and prayers going out for her.  It means a lot to us!

UPDATE:
We went and visited Lois today and she’s doing so much better!  She was alert and aware and whining to come home with us.  I got a picture with my iPhone.  You can see the feeding tube in her neck (detached of course).