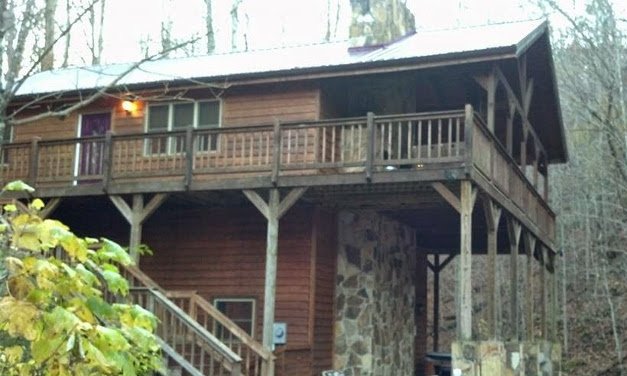 This past weekend we made a trip to the Red River Gorge area in Stanton, Kentucky for our friend Mr. Charlie’s 40th birthday.  This is the second time we’ve been to the Gorge in November ( we went for Charlie’s birthday in 2010 also ) and, in the end result,  it did not disappoint.  We stayed at a very nice cabin called Lakewood. The cabin itself was gorgeous, as were the surroundings with all the woods and creek running through the bottom of the property.

The weekend started off with picking up Christina and Charlie at their house and then Beth from her house.  We had a great, slap happy time on the way to the cabin, laughing all the way.  There is never a dull moment with this group, ever!  After many “just around this curve” comments, much joking and laughing, we pulled off the exit and had a quick lunch at Hardee’s before going to the local tiny Kroger to get groceries for the weekend.

After lunch and shopping we headed up to the cabin site.  At the head of the road we stopped in to check in and get the keys to the cabin.  There is a whole story to the ten minutes we were there, but all I will say is that there were gassy fumes in the truck cab and step issues at the check in house!  The perfect start to our exciting weekend.

Once we got to the cabin, the only complaint was that the rental site touted the good cell phone service due to a cell phone booster and WiFi.  We did have so-so WiFi – but the cell phone reception was non-existent.  We realize that most people go to these places to “get away from it all”, and while we would love to do this, we just can’t due to our jobs.  Thus it was very disappointing for our friends to rent this place just for us because it was the only one with cell coverage and WiFi, only to get there and it have zero cell coverage and very spotty WiFi.  To make matter worse, firewood was purchased for a steep price of $20 to be delivered to the cabin.  As the wood was being delivered we were informed that the cell phone booster did not work at all and anyone with Verizon would not get any type of signal (though our AT&T people didn’t get a signal either).  On top of that, all of the firewood that was brought in (all 10 pieces of it – for $20 mind you) was wet and would not burn.  Not turning out to be such a good deal, eh?

However, it all worked out in the end.  Jason was able to get an app on his phone that would allow a phone call to get through if there was an emergency.  The fire was a bust that evening due to wet wood, but at least the hot tub was in good working order.  So after a yummy steak and potato dinner the guys did their own thing and the girls went to hang in the hot tub for some good, old fashion girl talk.

The next morning we had a yummy breakfast of bacon, eggs and biscuits while we waited for Lydia and Ben. to arrive.  We met them up at Kroger and went directly to a hiking trail that led to Hidden Arch.  It was a very nice two mile hike and was beautiful!  On the way back to the cabin we took a short detour to drive through a natural rock tunnel.  It was a tight squeeze for Big Nasty, the F-350, but by pulling in the side mirrors we made it through. 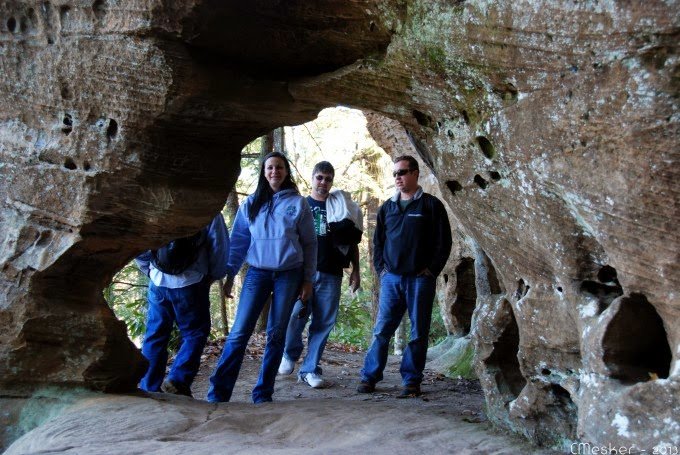 After that we headed back to the cabin where lasagna was prepared for that night’s dinner.  Lydia and Ben went in search of dry firewood and came back with a mother-load of great wood for $10.00…and it was dry and burnable!  So we spent the evening on the porch burning our dry wood in the outdoor fireplace.  It was a pretty calm evening – though we did have to make a human ladder at one point to turn off the outdoor ceiling fans since it was quite cold and no light switch seemed to work the fan.  At the end of the night we sang happy birthday to Mr. Charlie, let him blow out his cheesecake candles and one by one drifted off to bed.

It was a fantastic, fun weekend that I will always remember.  And, as always, I got lots of photos. Next year we will replicate the trip, but instead of a cabin rental we will be taking our travel trailers! 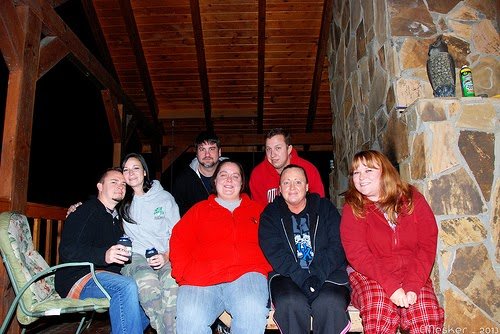