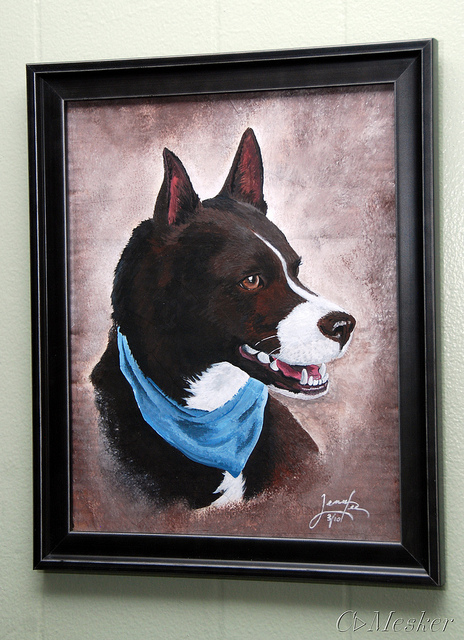 This is my beloved Rudy who passed away a few years ago of canine lymphoma.  He was the best dog!  He was almost  a year old when we adopted him from the Animal Care Society,  a local no-kill shelter, and we think he was likely a lab/chow mix.  We adopted him so Hardy would have a buddy to play with while we were gone at work. They were like two peas in a pod and got along great.  Rudy would follow Hardy anywhere and Hardy quickly taught him the ropes.  The biggest problem we had with Rudy at first was his separation anxiety.  He generally was crated when we were away as he became quite destructive if left to roam the house.  We once came back from Thanksgiving dinner to find the innards of our couch all over the living room.  He did that to two couches, actually.  But we still loved him anyway.  :*)

Here is the original photo: Jenn of The Artist’s Eyes creates these awesome ECO friendly pet portraits and they are, obviously, stunning!  Check her out!