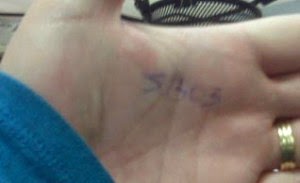 I admit it, I’m a sleep walker (and talker for that matter).  I’d like to say I don’t do it very often, but I really don’t know.  Sometimes I wake up and sometimes Jason puts me back to bed and tells me about it the next morning, but there have been times when I would have never known I was up and about if it wasn’t for the evidence I find the next morning.  For example, I once took an oil lamp from the dresser, set it on the floor and disassembled the entire thing and left it in 5 pieces for myself to find the next morning.  I have no recollection of being up, of having any dreams involving dismembering anything and Jason slept through that one.

Then there are times when I do something that causes me to wake up, like when I opened the back door and the cold, January wind woke me.  (I was dreaming I left my camera out in the backyard and had to get it before it rained).  When that happens I just simply sigh and take myself back to bed.  Except for the time that I dreamed someone was chasing me and that I was climbing a fence to get away from them…that one was a doozy.  Instead of climbing the imaginary fence, I was actually climbing the bookshelf that is in my bedroom.  I wasn’t woken up until the entire shelf, along with about 130 books, toppled on top of me, waking me up.  That one freaked me out!

So my sleepwalking has been fairly calm over the last couple of months, or so I thought.  This morning I woke up, no recollection of dreams, waking up in the night or anything.  Yet printed on my left hand in blue ink in my writing was 5 numbers.  It looks like the number 51303 (apparently I don’t write very neatly when I sleep).  I’ve been wracking my brain all morning trying to think of what these numbers might mean…no luck yet.  I never thought to blog before about my sleeping adventures – I’ll have to start keeping track.  Maybe I’ll find a pattern!

← Camping Recap ← Life on the Couch…and Another Photo Flashback