As mentioned before, when we first took in Buddy, our Great Pyrenees/Golden Retriever, from the horrid conditions he was in, there was also a female Pyr with a litter of puppies…Buddy’s puppies.  At the time they were just tiny (well as tiny as a Pyr can be) little nursing furballs, maybe a month old at the time.  This puts them at almost 5 months old now.  I’ve been able to keep up with some of the puppies since this site URL is sometimes given to the new owners so they can see what “dad” looks like.

The other day I had a nice comment from Lesley on The Critters page saying she had adopted one of Buddy’s sons.  His name is Henry and he is just the cutest, fuzzy headed little thing!  He looks a lot like Buddy and he’s a very lucky boy!  He gets to go to work with Lesley every day and everyone around town knows who Henry is.  At almost 5 months old he already weighs over 40 pounds, barely under what full grown Buddy was when he first came to us.  (Now Buddy is around the 85 pound range – I need to go get him weighed again).

Lesley was kind enough to send me photos of Henry and says she’ll continue to send them so we can watch him grow up – how cool is that!

Here is sweet Henry – check out that fuzzy head! 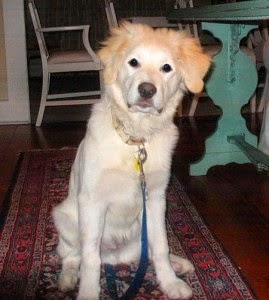 And Henry in his Halloween getup. Look how happy he is – ha! 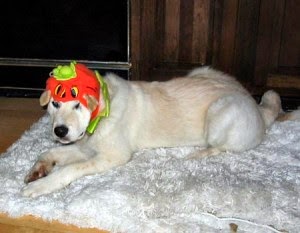 And as reference, a photo of Buddy, the proud Papa!