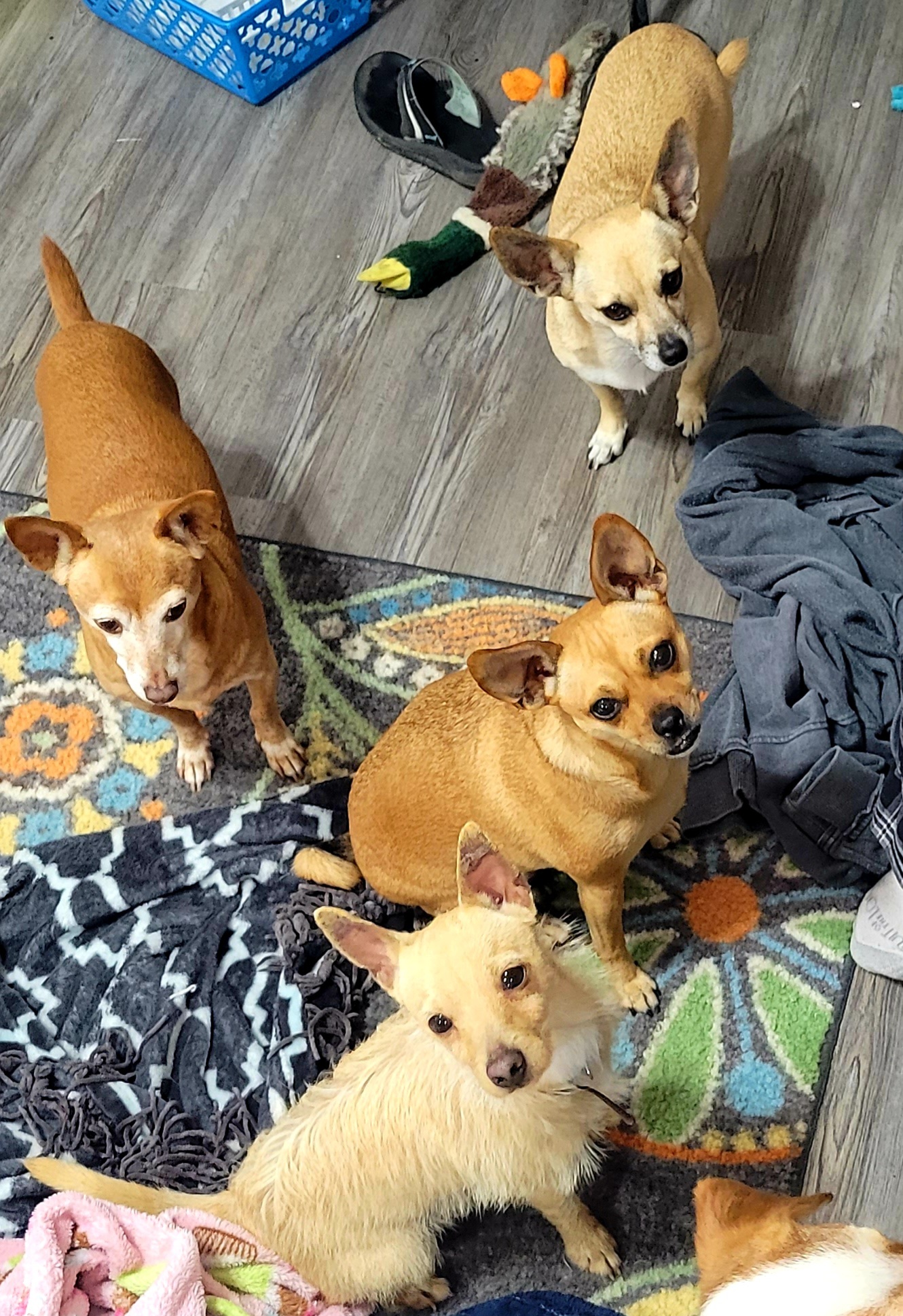 You can read the stories of how our pups, past and present, came into our lives below. They are all quite special to us and are definitely a part of the family.

Our current dogs are L.B., Claire, Frea, and Wiley. They have all led interesting lives and each of their stories can be read below. They are our spoiled furkids, our entertainment, and forever our best friends. You can also follow their antics on their own Instagram account at @sundogpaws_crew

“My goal in life is to be the person my dog thinks I am.”

Wiley is the dog we’ve been looking for for years! Who knew that next little foster stray to come through our door would be the one?  We tend to have needy dogs that want our human attention all the time.  Wiley has taught all of our resident dogs how to dog!  They now play chase together, tug-of-war, do zoomies in the yard together, and even nap together.  Wiley is a smart cookie and he knows how each individual dog likes to play and he makes sure he plays their way.

Wiley is a young guy – probably around 6 or 7 months old at the time he came to us.  He got his name because when he first arrived he was quite scraggly and had a horrendous case of ring worm on his ears….thus making him look like a wild baby coyote.  So Wiley C. is his name…stealing hearts is his game!

Wiley is a wild child.  He loves to play rough.  He loves to run hard.  He loves to eat all the things!  But better than all that, Wiley loves hard.  He’s a snuggler and lover when he wants to be and makes us laugh every single day.  He’s a sock stealer too…I’ll never have a matching pair again! 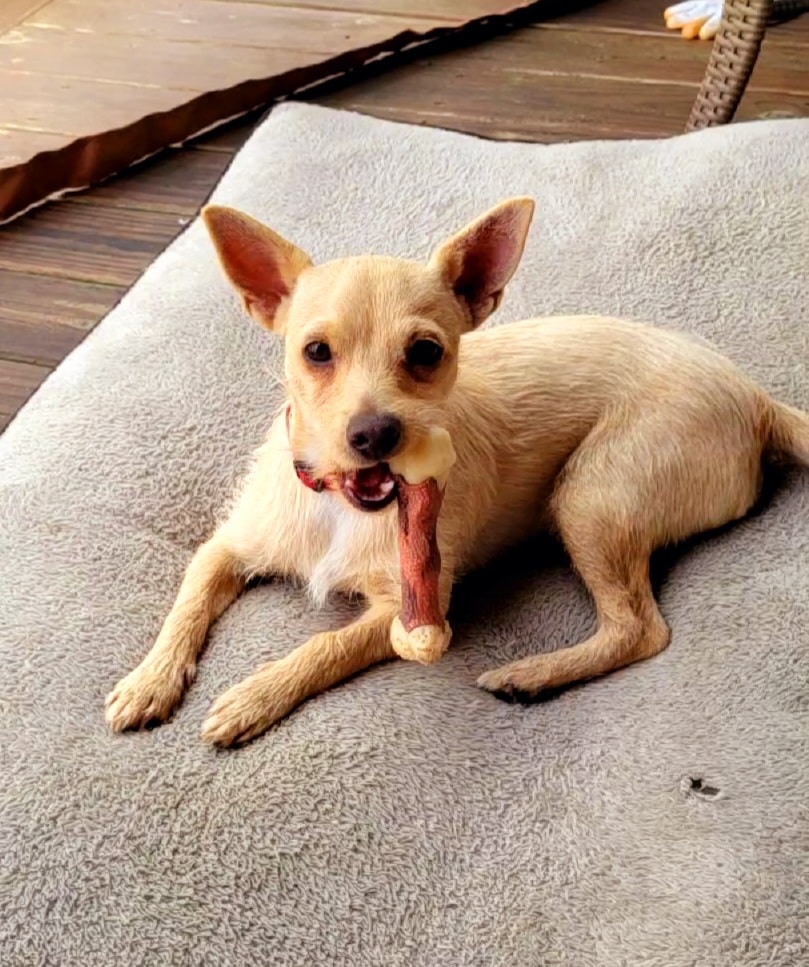 Frea joined us on August 17, 2019 and was adopted from Fred’s Mission Rescue & Sanctuary based out of Cincinnati, Ohio.  She’s roughly 2 years old and just the sweetest little thing!  She’s a chihuahua / pug mix, we think.  She’s got long legs, an adorable under-bite and one floppy ear.  She’s a love bug and full of energy.

We actually got her for Claire because they have the same energy levels, but Claire is slow to learn how to play with newcomers so it’s still a work in progress.  She is getting there though.  Frea is a dream. She doesn’t bark much, she doesn’t make a peep in her crate at night, and she only chews on toys in the dog’s toy box.   She’s also house trained and a great snuggle bug!

Frea LOVES food and LOVES fetch.  They are her favorite things in life aside from Mom, who is always within her site. 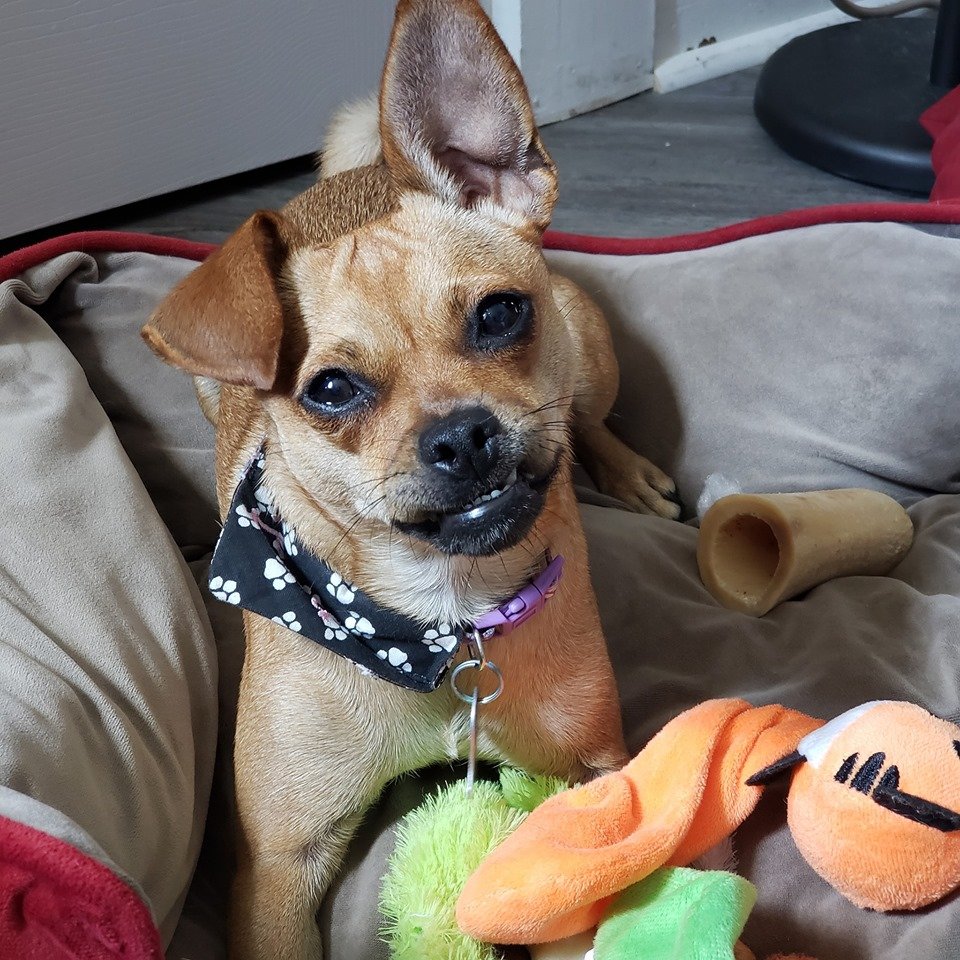 Claire joined our gang on March 22, 2017.  Claire was adopted from Louisville Metro Animal Services. She is a sweet, dainty little thing at just 10 pounds, but don’t let that fool you, she’s a handful!  She is a chihuahua / pug mix. We went to the shelter in hopes of finding L.B. a playmate since Lois Lane and Buddy were in their senior years and really didn’t have much interest in playing.  When we first found Claire she had no name at all, just a number…how sad is that?  She ended up at the shelter because she was in a car that had been repossessed and no one realized at the time that she was in there.  Her former owners were contacted once they realized what happened, but they apparently had no interest or means in coming to pick her up.  So we are now the lucky ones who get to love her!

We waited around the busy shelter for two hours before we got to meet Claire.  She was very shy and a bit fearful of Jason (and men in general) in her cage, but once she was out of the cage and on my lap for about ten minutes she started warming up to him.  She was all kisses, nibbles, and kept laying on her back in my lap.  She knew how to win my heart!  So we filled out the paperwork and brought her home that night.

It took Claire about two weeks to settle in and start playing with L.B., and now she is just nuts! I think the shelter missed the mark on her age and she was more like 6 months than a year, so essentially we adopted a puppy. She keeps us on our toes for sure! She loves to steal socks, play fetch, and run zoomies in the house and in the yard. Most of all she loves her Daddy and thinks she belongs wherever he is. 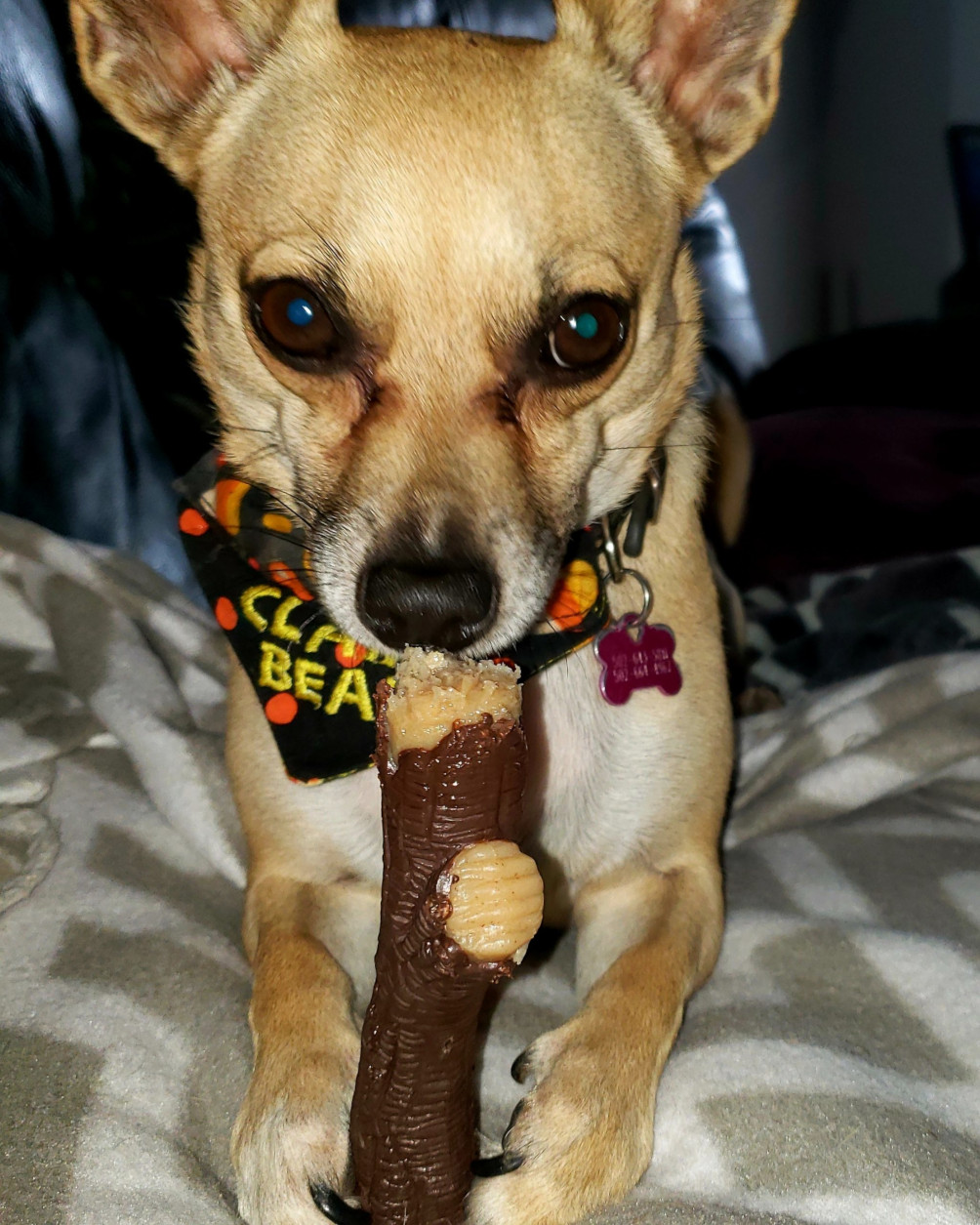 L.B., short for Little Bit, joined the household on February 21, 2013 when he was roughly three years old. He is a red chihuahua / dachshund mix – aka Chiweenie.  He was a two-time owner surrender at our local shelter thus high on the kill list, to no fault of his own. His first owner was forced to give him up for valid health reasons. The second owner only had him one day before returning him because he wouldn’t eat or go to the bathroom. L.B. must have just been nervous because he was fine from the moment he got to our house. He eagerly ate a bowl of food and proceeded to poo on the floor after.

He quickly made friends with Lois Lane and Giant Dawg and fits right in.  He did force us to make some fence repairs after he escaped through a gap and made me chase him a quarter of a mile, catching him just before he got to the main highway. I about had a heart attack that day!

He has now been neutered and updated on all his shots and got a shiny new micro-chip.  It’s also great fun watching a 10 pound dog play with a 100 pound dog!