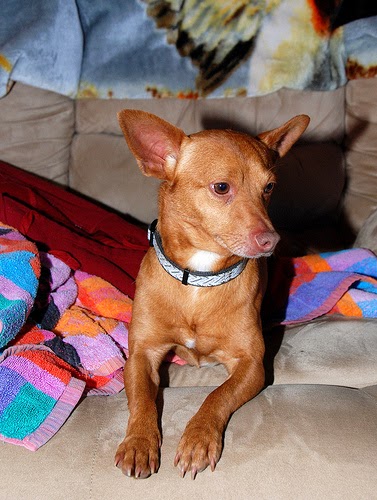 Today we picked up our second “foster” dog from the Humane Society. Spartacus (aka Sparky) is a 3 year old red chihuahua. His original owner had to surrender him due to severe health issues. He was then adopted again, but returned the next day because he would not eat or go to the bathroom. He obviously wasn’t given enough time at his second “home”, especially knowing how skittish chihuahua’s can be. Being a second time owner surrender, his time was limited and he becomes a high kill risk in a shelter.  Via the powers of Facebook he was brought to our attention and we decided to give fostering a go again. (If you recall, our first foster was a failure and Giant Dawg, aka Buddy, has been with us ever since.)

So, I introduce you to Sparky! Who we now call L.B. – short for Little Bit. He didn’t respond to any of his other names anyway.   As it turns out, we never really agreed that this one would be a foster  so he’s now the newest addition to the Mesker clan.  😉  We have also since figured out that he is a chihuahua mixed with dachshund, thus a Chiweenie – which is is other nickname.